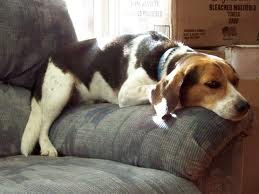 We've all heard of pet therapy for children, the elderly, handicapped and others. Animals are an incredible source of comfort, calm and unconditional affection. But what about when your pet is the one who needs therapy?

Sure, we've all heard of the dog whisperer, the man who can help train you to control your dog's anxiety, hyperactivity, aggression, fear and more. But when your dog suffers from low self-esteem, things aren't as black and white. It's not like our beagle, Flash, was doing anything so drastic as stealing or using drugs. But when he first came to live with us, he was definitely not happy. It wasn't just that he was depressed that his beloved owner had just died--the only "dad" he'd known since he was a puppy. We could tell that he just didn't feel good about himself.

First off, our house rules were different from his old home's. No begging is allowed at the table. No people food except as a special treat, and only when we distribute said treats. No dogs allowed in the bedrooms or on the furniture. No using the indoors as your personal toilet. This was a lot to adjust to and learn. A total lifestyle change, really. It would require trial and error, and commitment on his part and ours. Unfortunately for Flash, the occasional (OK, frequent) disciplinary action was necessary. At every infraction, my husband would sternly tell Flash, "NO! Bad dog!" and Flash would growl back and snap, defensive, uncertain and confused. Like a spoiled child, he didn't know how to react to the word "no" because he'd never heard it before. So he'd pitch a fit.

It was frustrating for all of us, and it made us wonder: would he ever learn? Would he ever be a playful, happy dog?

The truth is, in Flash's old house he did what he wanted, with no consequences. So even if his owners were displeased with his behavior, they didn't express it strongly enough to motivate Flash to change. As a result, like any child who is overindulged and allowed to run wild and unattended, Flash didn't feel proud of himself, because he was never praised by the people he loved most. He did what he wanted, but it didn't get him what he needed.

In truth it took about six months to reach a breakthrough with Flash. But when we took him on vacation with us, he suddenly seemed to understand that we were his family, he belonged with us, and we expected certain things of him. When he's a good dog, we praise him excessively, and he loves it. Any setbacks cause me to withhold belly scratches and goofy baby talk from him, and he really seems saddened by it. Ironically, our conditional love has taught him how to behave well; training Flash to stay off the couch was just the therapy he needed.

Today, he's a happy, well-behaved dog. He pays attention and listens, he responds to our commands, and he knows and follows the rules. And when he makes a bad choice--like heading for the garbage bag that's left unattended for more than four seconds--a stern tone is all that's needed to cause him to stop and slink away, aware that he just missed getting into trouble.

We certainly didn't train Flash by whispering. Quite the contrary. If he could talk, he'd probably call me Old Yeller. But then, I'm willing to bet, he'd thank me for setting him straight.
Posted by mamawrites No comments: Links to this post