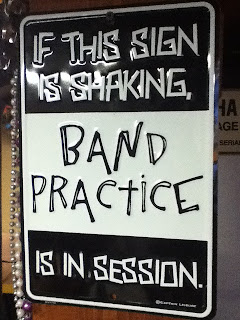 My eldest son, now 13, has always loved to sing. He graduated from chorus to All-County Chorus in school a few years ago, took some private voice lessons for a while and is also a part of the drama club at school (think: musicals). So most people would assume it was only a matter of time until I would hear him utter those fateful words: "Mom, I joined a band."

I was not one of those people.

When I hear the word "band", I think of horns and clarinets and off-key productions in the school auditorium. No, Jacob explained, a rock band. He saw a flyer in school, he went to the audition and passed the test. I was looking at the new lead singer for Black Magma.

Oh, ha ha, OK, great! Sounds like fun, I encouraged. The next day, he asked if he could host band practice at our house on Saturday. As far as I knew, they were still looking for a drummer, so I said he could. Five teenage boys and no drummer. How bad could it be?

Further investigation revealed that practice would include a keyboardist, a bass player, two guitar players, multiple amps and microphones and lots and lots of volume. We quickly deduced we did not have the space, relegated them to the outside deck and prayed for good weather.

Saturday came. We rounded up power strips and extension cords, warned the neighbors and locked up the dogs. Four vans full of gear arrived and emptied out. My husband was the roadie. Snacks and drinks were distributed. Plugs were plugged in. Instruments were tuned up. Lyrics were printed out. Our neighbors had guests over, and just as practice was beginning, we noticed them all filing out onto their deck. Had they forgotten our warning? Apparently not, because although it was chilly, they remained outside and the music began.

I went inside to try to do some work. I figured since the boys were outside on the lower deck and I was inside on the upper level, I might just get some writing done. Clearly, this was my first band practice. I got nothing done. But I did enjoy watching them from the window, listening to them laugh as they talked and worked together. When I heard them belt out songs by KISS and Iron Maiden in their sweet, on-the-verge-of-changing voices, and saw their smiles and pink cheeks in the cool air, I had to resist the urge to tell them how cute they all were. (I double-checked with my mom on this one: 'cute' is a definite no-no word when talking to rock bands.) But when they finished rehearsal and the neighbors all stood up and applauded, my heart swelled more than it would have if they had been at Madison Square Garden.

Yes, the dogs were out of their minds. Yes, it took 1/4 of the practice to set up and break down all the equipment and they only practiced three songs. But they had a great time, are planning their next rehearsal, and the whole experience made me realize my little boy isn't a little boy anymore. As I stood around chatting with the other moms about it, this sad realization was tempered when a few of the band members, after packing up, made their parents stay a few minutes longer so they could go play on the swing set in the corner of the yard.
Posted by mamawrites No comments: Links to this post