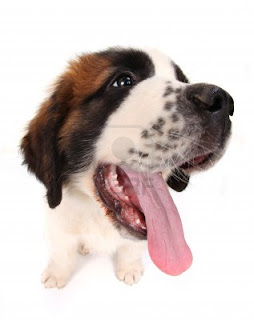 Our neighbors have a new dog. To be more specific, they are caring for a cousin's dog for a few months. The dog is just four months old, fluffy and playful, drooly and energetic, and full of puppy exuberance for, well, everything. His misnomer is "Mellow", for he is anything but. He is a Saint Bernard.

Mellow has been introduced to most of the neighborhood, been cooed over and played with, laughed at and enjoyed by kids and adults alike. Everyone is happy to have him on the block.

Everyone, that is, except Bailey.

One of the things we've always loved about Bailey is how much he loves to play. He will dig through his basket of balls, ropes and bones to find just the right squeaky toy and drop it in your lap to let you know he wants to tangle with you. He was even open to wrestling with Flash when Flash moved in a few years ago, even though Flash is half Bailey's size, and neither dog seemed to know what he was doing.

Whenever Mellow sees Bailey, his head goes down to the ground, his butt goes up in the air and his tail starts wagging. They are just about the same size, and Mellow seems excited to have found a 'peer'; he makes it very clear to Bailey that he wants to play. But Bailey growls, backs off, and seems only to want to sniff, to get the lowdown on the new guy, and then be left alone.

We suspect it may be Bailey's age. He is 12 now; his muzzle is lightening and his movements are slowing. Perhaps Mellow's exuberance makes him jealous (he barks at us when we pet Mellow), or perhaps, like the rest of us old folks, he's just afraid this kid is going to make him throw his back out.

There is one other explanation I can imagine, but it would require Bailey's intelligence to be far higher than we already know it to be. Perhaps Bailey sees a new dog living in Flash's old house, sees us being friendly to the dog and spending time with him, and in his mind, that can only mean one thing: that the dog will ultimately come and live with us as Flash did, forcing Bailey to share his family with yet another dog.

Some might think this a bit of a stretch, but it is only now, five years after we got Bailey, that he has come to semi-accept my friend who brought us together.

Bailey had been raised from a pup by a young woman in her 20s. When she became sick with cancer, she had friends--a family of kids, cats and dogs--who took Bailey in while she underwent treatment. It was expected to be a temporary situation, but the woman did not recover.

The family had watched Bailey for a year, but couldn't keep him long term. They mentioned to my friend, who is a physical therapist and had been making weekly trips to the house, that they were looking for new owners for Bailey. She thought of us. We met them, loved Bailey, and took him home.

The first time my friend came to our house once Bailey had moved in, and for many months after, Bailey would growl, back away from her, put his tail between his legs and tremble. He had never done this at the other family's house when she came to visit. My theory is that he made a connection between being forced to leave his other family and coming to live with us, and the common denominator was my friend. As a result, any time she showed up, he was afraid he'd be taken away again. In this light, the idea of Mellow coming to live with us as Flash had done is not a great stretch.

Growing old is hard. Insecurity can be paralyzing. Bailey seems to be fighting both as best he can. All any of us can hope for as we age is a loving circle of family and friends to stick by us through the hard parts, and our pets deserve no less.
Posted by mamawrites No comments: Links to this post 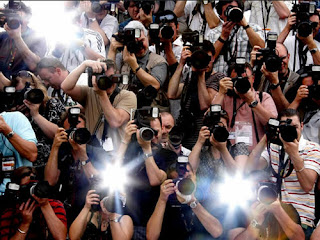 As a Leader-In-Training this year at camp, Jacob has become very popular among the younger campers. And as a leader-in-training-in-training, Ben has been along for the ride, gaining popularity in his own right.

Sometime during the first week of camp, Jacob was given the nickname "Blue Flowers" by a clutch of little girls, mostly 6- and 7-year-olds. Jacob wouldn't tell me the story behind the nickname, but ever since then, he has been greeted enthusiastically each morning as "Blue Flowers!" by this group of girls.

One day not long after this, Ben got off the bus to shouts of "Bye, Green Flowers!" by this same group of girls. It's adorable and makes me smile, even though it reminds me every day how much older my kids are than the campers and, subsequently, how old I am.

The last few days, however, I have felt more like a chauffer to a rock band. As we pulled into the parking lot one morning, I could see the group of girls near our usual spot, as if staking it out, waiting for my boys to arrive. To test my theory, I pulled past the spot and into another one and, sure enough, they all came running in a group shouting, "Blue Flowers! Green Flowers!". I was half waiting for them to start rocking the car. And the day when I drove my husband's car, they didn't recognize it at all, and practically came screaming when they saw the boys in the back seat.

Today was the best though: as I parked the car, they were shouting for the boys. As I put it in park and they gathered their things in the back seat, the shouts became a chant: "Blue Flowers! Blue Flowers! Green Flowers! Green Flowers!" I offered Jacob a pen so he could sign autographs when he got out, and for a split second, it felt like they were climbing out of a limo into a throng of adoring fans.

I would never wish that kind of fame on anyone--watching the royal couple this week and all the attention the new prince garnered before he'd even arrived was a perfect example of a life that will never be "normal". Ben smiles at the girls' escapades, but is essentially shy and a bit sheepish about all the attention, as I would be.

Jacob, on the other hand, blooms in the spotlight. He was singing on stage when he was five, and has loved having an audience ever since. It's easy to see he welcomes these displays, a daily chance to be admired and revered, even if he's unwilling to reveal the backstory of his fame to me.

While I would never want my kids to be hounded by fans or paparazzi, if it were a side effect of Jacob's dream job, I wouldn't begrudge him. Who knows? Such a thing might make him nostalgic for his early days of fame, the days when everyone knew and loved him by his stage name, "Blue Flowers".
Posted by mamawrites No comments: Links to this post 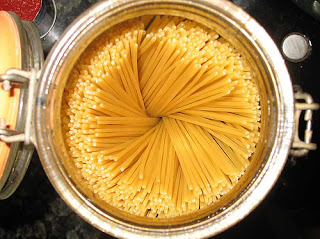 It started with the pasta.

Once upon a time, one pound of pasta, a side salad and some garlic bread was enough to feed my family of four. As the kids' palates expanded, so did my recipe box. I could make a pound of ground beef into enough tacos for all of us; a two-pound bag of mussels would feed us all (half was shells, after all), and a pound of ground turkey made my much-loved chile, garlic and basil turkey dish.

Then one day, after seconds of pasta had been taken, the pot was empty. No leftovers? OK, we can deal with that. Next time, I'll just make a pound and a half. That was the beginning.

I have recently come to learn that, with two growing boys and their growing appetites, I must start doubling all my recipes. Otherwise, by the time my husband gets home from work, he will be eating yogurt for dinner, with a side of mustard.

I'd been warned, of course. Teenage boys are voracious, always with their heads stuck in the fridge looking for something to eat. No matter that they just ate lunch (or breakfast or dinner or snack) an hour ago. The old rules no longer apply. And while Ben is not yet a teen, he is well on his way. At least his stomach is. As with everything else, the appetite thing seems to be a competition between the brothers.

So I am thankful that I had my kitchen updated, my pantries expanded and that we are shopping for a new refrigerator. Fortunately, doubling my recipes doesn't take any extra time, so maybe I can go find a part-time job to help pay for all the extra groceries. In the meantime, I'll just make it a point not to let my fingers get too close to their mouths.
Posted by mamawrites No comments: Links to this post 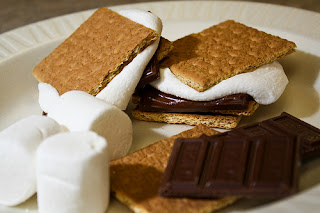 This past winter, Ben got braces. This was important and necessary and demands a great deal of responsibility. Braces require care and food restrictions and thorough cleaning and regular visits to the orthodontist. And Ben has been great about it all.

But that doesn't mean it's been easy.

Sometimes we have to remind ourselves, as adults, that when you're a kid, little things are everything. Summer is about fishing and fireflies, swimming and cookouts. So when you are denied the little things, it's a big deal. This weekend, we went to a barbecue to visit some old friends of mine who I hadn't seen in almost 20 years. While we parents talked and ate and caught up, the kids played hide and seek, went searching for lightning bugs and stopped briefly to refuel on dinner.

After dinner, we went outside to check out the fire pit, something we don't have at home. Fire pit! Burning stuff! Ashes floating up in the night sky! Totally cool! And the best was yet to come: s'mores! The best, that is, unless you have braces.

Marshmallows are a no-no with braces, so that dessert-that-says-summer was off limits to Ben. Needless to say, he felt it was unfair and was not at all happy about it. To compromise, we let him have extra chocolate and graham crackers, and then he roasted marshmallows for all the adults. It broke my heart to disappoint him, but he recovered pretty quickly.

Like most parents, I hate to deny my kids things that bring them pleasure. S'mores are as much a part of childhood summers as beaches and fireworks, and I would have loved to bend the rules. But childhood doesn't last forever, and adulthood brings even bigger disappointments. I would rather my kids learn how to handle them now, when they have my help. My hope is that when they are older, they'll be able to make the right choices, no matter how hard it is or how much easier it would be to bend the rules.

Ben may not remember this as the summer of no s'mores, but he will always carry with him the pride he felt when I praised him for his maturity. And as much as it hurt me to tell him 'no', I take some comfort that, as hard as that night was, his road ahead will be easier for it because of what he learned.
Posted by mamawrites No comments: Links to this post