Last week, Jacob went on his first date, something I think is wonderful. But for some reason, each time I mentioned it to one of my mom friends (who have children the same age as Jacob), I got the same reaction: "Oh my god!"

The first time it happened, I laughed. Wow, can you believe that we're old enough to have children who date? Our babies, who brought us together at the new mothers' group at the local library, are no longer babies. How time flies, I figured she was thinking.

But then it happened again. And again. And suddenly, I was wondering, what the heck? Why do these mothers sound so afraid, aghast, shocked? I didn't say Jacob got arrested. I didn't say I'd found a crack pipe in his backpack. So why all the horror?

Could it be that, since they don't know the kids involved as well as I do, their minds go down the stereotypical "teen dating" track? Dating leads to kissing leads to petting leads to--agh!--sex. It's understandable.  As parents, none of us want to think about our kids being old enough for that.

But just because I (and the kids) called it a date, we must not forget that the interested parties are kids. So they are starting off with baby steps, as they would with any new endeavor. Dinner at a restaurant, dessert at the ice cream stand, then hanging out and drawing at the house afterwards. Sweet. By the book. Like when I was a kid.

They worked out the details of restaurant, finances and timing. I just did the driving. They have been good friends for a few years because they have a lot in common. And they are both new to the whole "dating" thing, likely influenced by hearing all of their peers talk about it. But the reality? It's just a play date by another name.

There are a lot of scary things in the world, and I need to prepare my boys to face them. And maybe it's just my own naivete, but I don't see dating as one of them.

To me, dating is the beginning of a years-long journey in emotional maturity and self-discovery. Jacob's going to have to go through it eventually; we all do. It's part of growing up. Now I'm seeing him start the journey with someone he cares about, someone with whom he's shared a strong friendship, lots of laughter and mutual respect for years already. Aren't those the very things that all lasting relationships are based on?

Like any parent, I want my kids to be happy. It's my hope that one day Jacob will begin his married life the same way--with a good and trusted friend by his side. So although that's still many years down the road, shock and awe aside, I'm pretty confident he's off to a great start.
Posted by mamawrites No comments: Links to this post 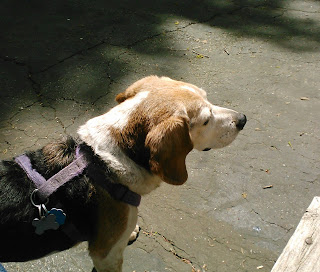 Last week was a confusing one for Flash. For three days, my oldest son was on a trip with his class to Washington D.C. One less kid isn't terribly strange, at least to the dogs, because it happens temporarily all the time. But during one of those days, Bailey also went to the vet for a full day for some minor surgery. As the pack continued to shrink and not re-grow at the end of the day, Flash started to look worried.

Ben and I gave him lots of lovin', took him for extra walks and reminded him he was a good boy. But he spent a lot of time in his bed, only raising his head to look at me forlornly every time I came downstairs, as if asking, "what did I do wrong? How can I get him back?"

It's strange how you don't really consider the dynamic of a family until it experiences a distinct shift. Kids, of course, are the first to feel the difference. Ben didn't seem to know how to behave without Jacob in the house. Who is he when not considered in relation to his brother, the guy who's been there just like Mom and Dad ever since the day Ben was born? I couldn't figure out if he was more outgoing than usual, or if I was just more tuned-in to him. But he definitely seemed to be feeling his way, clinging a little more and acting a little differently.

Ironically, Flash seemed to be feeling the same effects in Bailey's absence. Without 'big brother' by his side, he was hesitant to walk far from me when we went out, and was particularly happy to be petted indefinitely, getting closer and closer as I scratched his ears. He'd likely have crawled into my lap if I'd let him.

More than love, I think the little guys were feeling an indefinable loss of themselves with the big guys gone. As much as they squabble, jump claim on each others' toys and beds, they look to their elders for guidance in their behavior. Sometimes it's annoying when they're around, because they're around ALL THE TIME. But when they're suddenly NOT around, things just aren't right. There is comfort in knowing they always come back, so when they don't, there's doesn't seem to be proper closure to the day.

Happily, the entire pack was reunited by Friday night, along with the addition of my writers' group. To say it was crowded and chaotic is an understatement; to describe the noise level would be difficult. Everyone stayed up far too late. But one thing is certain: everyone was happy to have everyone home, to get back to our regularly scheduled, messy life.

Posted by mamawrites No comments: Links to this post

Night At The Library 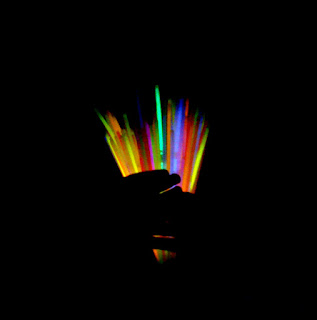 When I was a kid, my library was walking distance from my house. A three-story building with thousands of books and lots of nooks and crannies for curling up far away from my noisy brother, it was my second home.

Fast forward, er, a bunch of years. As soon as I had kids of my own, I sought out the library in our town for books, story time, sing-a-longs and every other bit of magic libraries offer. To this day, my kids love the library, for various reasons, including the after school clubs. My middle-schooler has been part of an Anime/Gaming club this year, and it's a great way for him to socialize with friends who have already moved up to the high school. Once a year, the library holds a lock-in: an overnight event open only to members of the club. This year, Jacob got to participate.

With Jacob's permission I offered to chaperon if necessary, and the staff took me up on it. I'm not sure who was more excited: me or Jacob. This past Friday, we showed up as the library was closing, sleeping bags, pillows and toothbrushes in hand, for our first ever library sleepover.

First off, it should be noted that, in this particular instance, the very definitions of 'library' and 'sleepover' go right out the window. This is because:

1)  I am fairly confident the library walls have never contained the volumes it did that night (I'm talking audio, not literary or crowds). There were 15 of us: two adults, four teenage boys and nine teenage girls. If my calculations are correct, 9TeenG + 4TeenB (pizza + Doritos + Pepsi) = energy + volume levels200. When glow sticks are factored in, the exponent doubles.

2) Very little sleeping occurred. Apparently, teenage brains closely resemble those of bats in that they are most active at night and in the wee morning hours. As a result, things didn't really get rolling until about 10pm (note: this is my usual bedtime).

Despite appearances, teenagers are really just little kids in adult bodies. Even though I expected everyone to play video games, watch movies and text all night, none of that happened.

When the energy got high, there was a library-wide scavenger hunt, a multi-round game of hide-and-seek and a 100+ glow stick fight. And when it slowed down, there were lanyards and friendship bracelets, cookies and books, card games and nail polish, music and lots of conversation. One student even pulled out his favorite kiddie books from the Children's Room: Goodnight Moon, One Fish, Two Fish, Red Fish, Blue Fish and a stack of others. He read them all, out loud, and had an attentive audience.

I was able to stay awake until about 2:15, then dozed for another hour until it was finally 'lights out'. With the girls in one section of the library, the boys in another and the librarian and me in the middle, I slept like a cat, rousing whenever I heard the slightest sound. By 6:15am, kids were headed back and forth to the bathrooms, and it was time for breakfast.

Despite having too much junk food and not enough sleep, it was a great night, even for me. I got some reading done, some writing, and learned a few things from each kid I spoke with. Jacob loved it too. He had hours of play time with his closest friends, with no little brother or bedtime to interrupt the fun. Mom was there but somehow managed to not embarrass him. And best of all, a girl he's liked for a while asked him out, and everyone applauded.

On the way home, I asked Jacob if he would do it again next year. Through his yawns, he said his only complaint is that he has to wait a whole year. Would I do it again? Yes, especially if the kids are as terrific as the ones from this year. Next time, I may even get in on the glow stick fight.
Posted by mamawrites No comments: Links to this post